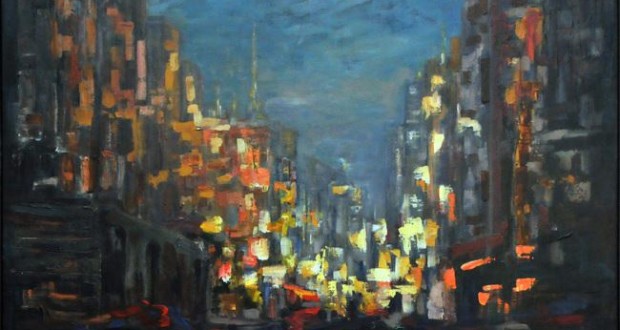 São Paulo in love with the city where he was born, stage throughout its existence, Nilda Luz pays tribute to São Paulo with the solo exhibition Loving and Living Sao Paulo, open to visitors from 25 January.

The exhibition takes place in Pateo do Collegio. A significant place of choice: there was born the city, there is 464 years, in 25 January 1554.

Being the birthday of St. Paul always an invitation to the city's rediscovery, the exhibition of Nilda Luz It becomes even more relevant. The three dozen artist's paintings presented in Loving and Living Sao Paulo They offer the viewer a unique view of the artist for many cuts city.

city ​​egregious - For Nilda Luz, the exhibition is, above all, expression of his love for the city. Your objective, the firm, is “awakening citizenship and love for Sao Paulo”.

Loving and Living Sao Paulo gathers 30 works, covering an arc of time 1984 to 2018. Are spontaneous figurative paintings, nonacademic, that mix a bit of abstract with modern lines - that the stylistic trademark of artist.

On two screens with the title “by Artist House”, Nilda Luz leaves aside the São Paulo postal cards to record the simple bucolic and flowery and wooded landscape sighting of the windows of his home-studio, in São Bento Jardim.

Full exposure to suggestive series “Retrospective 1984 – rereading 2004”. Her, four small paintings in oil on canvas appear embedded in wood paneling and then expand - the original paintings gain continuity through painting in acrylic on wood.

Enthusiastic and curious - Words of artist Nilda Luz about his work:

“I'm an artist and curious entusiamada, looking to see the beauty of things and sets out to record what you see and feel, why the urban theme is the main focus of my work. So that now, before everything, I am a São Paulo citizen in love with the city where I was born and experienced my own story. “Loving and Living Sao Paulo” invites you to look at the city more carefully… See the immense architectural wealth that hides in its old buildings, in its monuments, squares and public gardens and new and bold constructions that come up every day and further increase the grandeur of this city.”

Representative of São Paulo soul - Excerpt from “Nilda Luz and the art of love to life”, curator of the text Carlos Zibel:

“The show Nilda Luz offers us the rare opportunity to assess the trajectory of a mature artist, sure their art and carries unmistakable pictorial quality. Exposure behaves a bit like retrospective of his last pictorial investigations. are placed in sequence of at least two phases which acquires a technique appears definitely own language and, at different times, both a tendency to abstraction as the privileged claim of historical theme, root. (…) The applicant approach to historical issues with the warm welcome it has received from the years 1980 enshrine Nilda Luz as a representative artist emeritus of landscapes and soul of São Paulo. (…) [In your work] outcrop quick brushstrokes in generous swathes of paint laden with emotion and sensuality without prejudice, however, the aesthetic value and balance the whole pictorial, brands present in elegant fabrics artist and one of the outstanding attributes deriving from his training in classical art and modernist.” 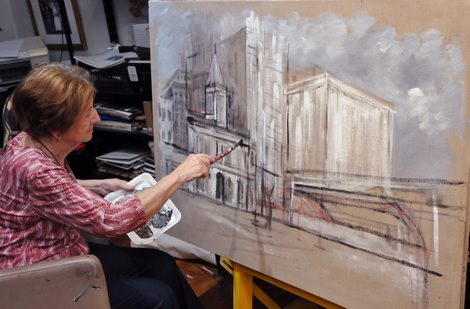 The artist – Nilda Luz, born in São Paulo, 82 completed years now 6 January 2018, is an artist with studies and training for the Paulista Academy of Fine Arts, the School of Arts and Crafts and the Art Museum of Sao Paulo. It is also historian, writer and researcher of the gastronomic culture.

Since 1979, He participated in over fifty salons Art Official, obtaining numerous awards - the highlighting of-42 and the 46th Paulista Salon of Fine Arts, organized by the Government of the State of São Paulo. Had their work presented in several group exhibitions and held several solo exhibitions - among them “Look Sao Paulo”, “São Paulo in Plateau” and “Retrospective 40 Years of Painting”.

Among his works acquired by private collectors and public and private entities are sixth collection “Via Sacra”, series of fifteen paintings exhibited in the Consolata Church in Jardim São Bento, the work “It is dawn in São Paulo” exposed in the Legislative Assembly of the State of São Paulo and also the screen “City Foundation”, exposed in the Crypt of the Anchieta Museum as a permanent collection of the Pateo do Collegio, in São Paulo.

As a writer-pequisadora released books “Around the World Gastronomy in São Paulo”, “Brasil – Gastronomic Tourism”, “Brasil, Cup champion and kitchen” and “Living is Easy”.