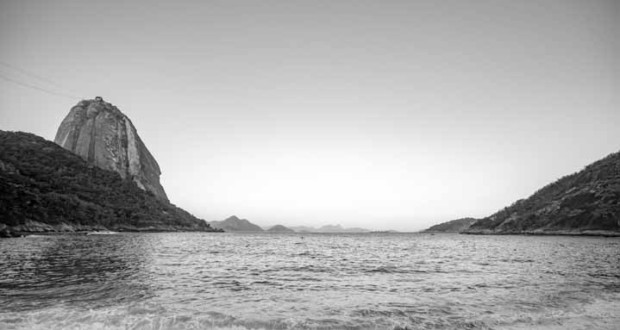 Posted by: Artworks in Art, Highlights, Literature, World Art 1 of September of 2021 0 61 Views

the perfect title “Naked eye”, configures itself in a great metaphor for an artist who is always unprejudiced, restless, multidisciplinary, willing to create and recreate, masterfully uniting different themes in his consistent and broad work.

Naked eye – Rogério Reis (Instituto Olga Kos, 2021), 160 pages, R$ 120,00, is the new book by the renowned photographer Rogério Reis, to be released in bookstores in September. The beautiful publication edited by brothers João and Kiko Farkas, brings together a consistent overview of Rogério's work, whose trajectory marks about 40 uninterrupted years.

All in black and white, bilingual (English Portuguese), Naked eye is divided into well-known works by Rogério Reis, like on canvas, nobody is nobody's, moments of his long career as a photojournalist that brings historical images such as the beautiful portrait of Carlos Drummond de Andrade (1902-1987), from 1982, when the poet completed 80 years, produced for Jornal do Brasil (JB), the train surfers on the Japeri branch in Rio de Janeiro, international repercussion work, to the F4 Agency, among other stunning images on the streets and beaches of Rio de Janeiro, many new ones like the nuns in Leblon, RJ, that reference the Bressonian decisive moment. Naked eye he does, therefore, a beautiful tribute to street photography, widely used in the 20th century and a little forgotten with the digitization of images. “This book for me is an editorial reunion with street photography" says Rogério Reis. 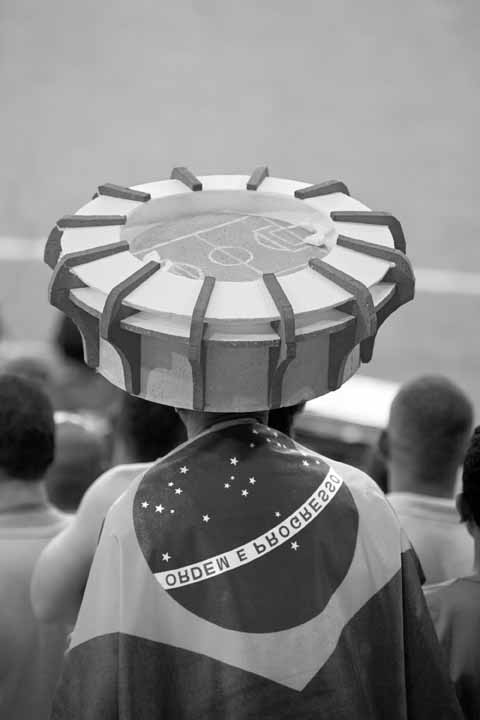 Subject: Fan with a mockup of the stadium in his head at the Estádio Jornalista Mário Filho test event – also known as Maracanã – game between Ronaldo's friends Phenomeno vs Bebeto's friends that marks the reopening of the stadium / Local: Maracanã – Rio de Janeiro (RJ) – Brasil / Date: 04/2013. Photo: Disclosure. 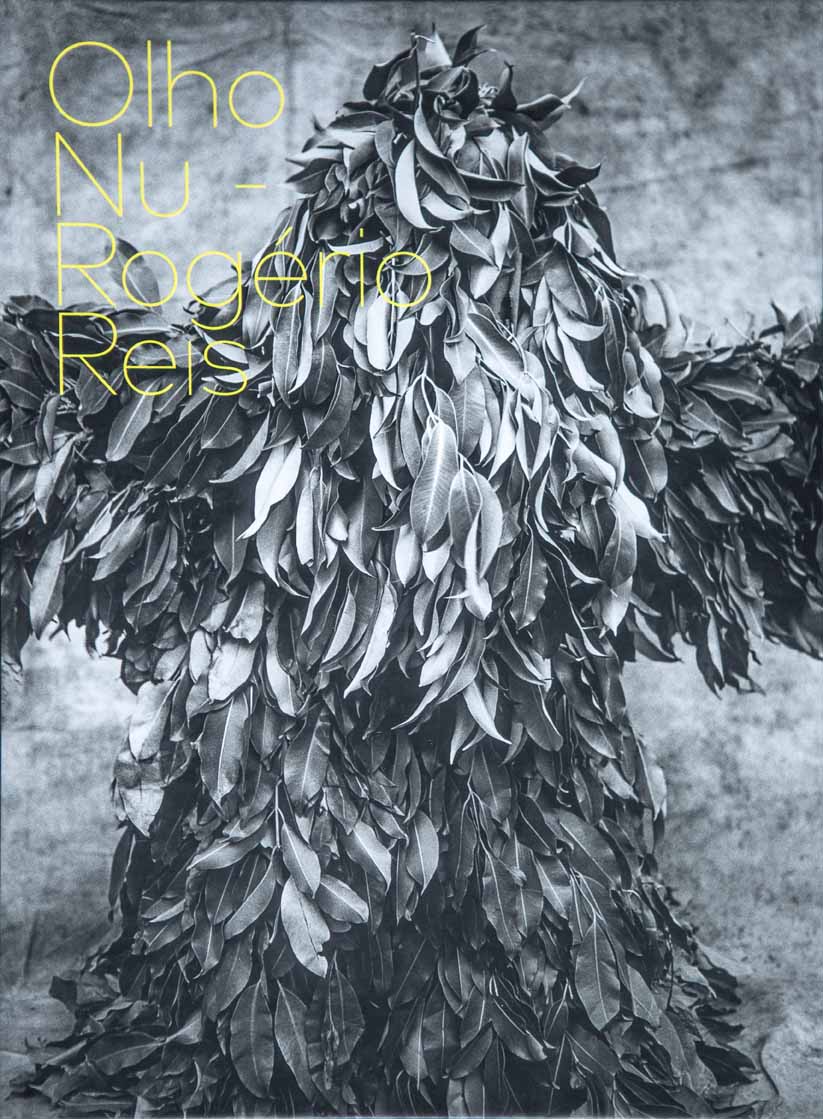 With editorial whimsy, the book brings, yet, the record of a thought-provoking author conversation with book editor, the photographer from São Paulo João Farkas; the artist and teacher from Pará Mayra Rodrigues; the photographer from São Paulo Edu Simões; the journalist and professor from Rio de Janeiro Rosental Alves; Rio de Janeiro historian Ana Mauad and Rio historian Maurício Lissovsky, a stellar cast of art production and thought, of photographic image and Brazilian social history.

Olho Nu is one of those books that becomes a consumption dream for every shelf.

All amounts raised by the author from book sales by bookstores will be donated to a social project in the city of Rio. 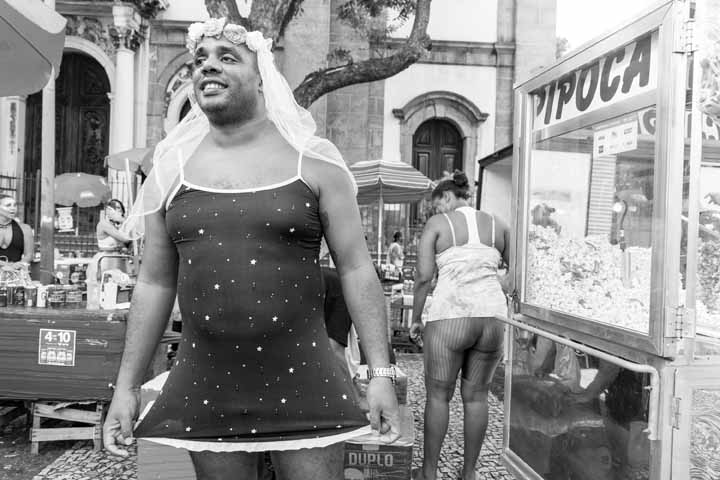 Rogério Reis was born in Rio de Janeiro, in 1954, where you still live and work. He graduated in journalism from Universidade Gama Filho in 1978, when I was already working for a year as a photographer for the Jornal do Brazil. Teve uma breve passagem pelo jornal The Globe the following year, antes de retornar ao Jornal do Brazil, where remained between 1980 and 1982, passando depois à revista See, with which he collaborated during the years of 1983 and 1984. Between 1985 and 1989 was part of the Rio de Janeiro section of the F4 agency and, at the end of 1989 founded, with Claus Meyer and Ricardo Azoury, the current Tyba collection, in which he works until today. He was photo editor at Jornal do Brazil no período compreendido entre 1991 and 1996. In 2002 his portrait of the poet Carlos Drummond de Andrade sitting on Copacabana beach was the basis for a sculpture by Leo Santana that is now one of the tourist references in Rio de Janeiro. Rogério inspirou o personagem do fotógrafo de mesmo nome do filme God's city, by Fernando Meirelles, based on the book by Paulo Lins.

He says that photography appeared in his life when he was still a teenager, by influence of the counterculture environment, where were then sought after less conventional professions. In the wake of the Sundays of Creation, the Museum of Modern Art, Rio de Janeiro (MAM-RJ), very important experience developed by the critic from Minas Gerais, Frederico de Morais, Rogério took classes with the Hungarian George Racz, in the photography workshops of the School Block of this museum, in the early years 70, and later in the courses of American photographer Dick Welton, who worked for Manchete magazine, by Bloch Publisher. Rogério's work is present in important collections such as: Biblioteca Nacional da França, Paris (2021); Chengdu Contemporary Arts Park Museum, China (2017), Museu Histórico Nacional, Rio de Janeiro (2017), National Museum of Fine Arts, Buenos Aires (2016), MAR-Rio Art Museum (2015), Maison Européenne de la Photographie, Paris (2014, 2012, 2010 and 2008), MAM-Museum of Modern Art, Rio de Janeiro (2002), MAM-Museum of Modern Art, São Paulo (1999), Douglas Nielsen Collection no Tucson Museum, USA (1996), MASP/Pirelli Collection, São Paulo (1995).