Home / Art / An exhibition for anyone losing time 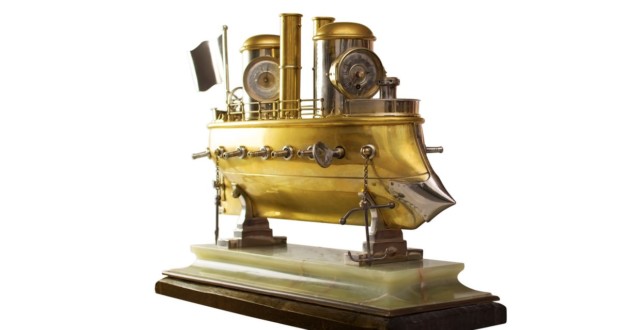 The highlight of the 2017 is the "steam Gunboat Ship" with your measurement system. Photo: Disclosure.

An exhibition for anyone losing time

Located in the city of São Paulo, the clock Museum "Prof.. Dimas de Melo Pimenta "is the only establishment of its kind in Latin America and houses a large and varied collection.

With more than 650 items on display, the site features rare pieces from all parts of the world.

The visit allows the public a historical immersion in the field of watchmaking through information and observation of objects still curious how the coffee maker alarm clock.

Between the days 15 and 20 November, the clock Museum promote your 45th Retrospective, with free entry.

The highlight of the 2017 is the "steam Gunboat Ship" with your measurement system.

The piece is of French origin and represents the revolution occurred both within military technological and which defined the supremacy of the Western countries about everyone else in the 19th century.

Were times of Nations with large navies, able to navigate long distances and were also fitted with large military power.

The model that the attendants can check during the retrospective at the Museum of Clock is similar to the French "La Gloire", It was the first warship in the world made in iron plates. The vessel printed a remarkable exuberance.

“We have a large catalog that brings historical models, varied and curious that please all kinds of public, Since the watch aficionados, scholars from various sectors, children and young students. And the retrospective is a special and important to broaden the access of visitors to our Museum”, details Dimas de Melo Pimenta II, President of DIMEP.

In addition to this event in November, the clock Museum keeps open visitation throughout the year, receiving the public in scheduled groups or individual visits.

About the clock Museum:

Professor Dimas de Melo Pimenta, founder of DIMEP (that brings your name initials), possessed a collection of watches. And it was from this private collection has created the watch Museum 1950.

With rapid consolidation, the space went on to receive donations which resulted in the expansion of the collection that currently houses much of the watchmaking history, not only Brazil and worldwide.

The clock Museum houses in your collection all technologies already used by man to the count of the passage of time, being one of the leading museums in the world in your thread.