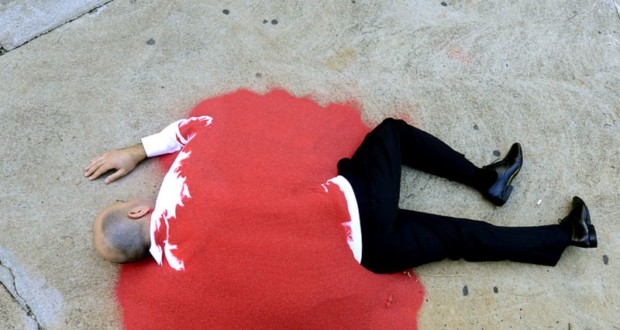 The performance WASTE, the artist Alexander D ' Angeli, one of the 10 selected works for the SP-Arte 2016, which happens to 7 to 10 April at the Ibirapuera Park, Opens the event on the day performances 6 April (only for guests). The paper presented last year in the city of Porto, in Portugal, happens the 14 to 16 hours and back to be held on Saturday, day 9 April, the 4:30 pm to 7:30 pm.

WASTE continues the research of the artist Alexandre D'angeli about possible interactions between body and space and its traces|memories in search for sensitive approaches with architecture and its equipment. In the work, He proposes think intangible residues of human action results in large cities, leftovers of your projects, investments and affections, the artist is under 250 pounds of red sand.

For Alexandre D'angeli, who performed the action for the first time in the city of São José do Rio Preto operating through intervention in urban space, WASTE dialogue with the physical elements, aesthetic and symbolic of the places where it happens and incorporates the participation of the subjects who inhabit and transiting through the city, In addition to creating new landscapes. The work also joined, in Gallery, the programming of the Performance in Meeting in Sesc Campinas, event that marked two years of "Performance" project developed by the unit. 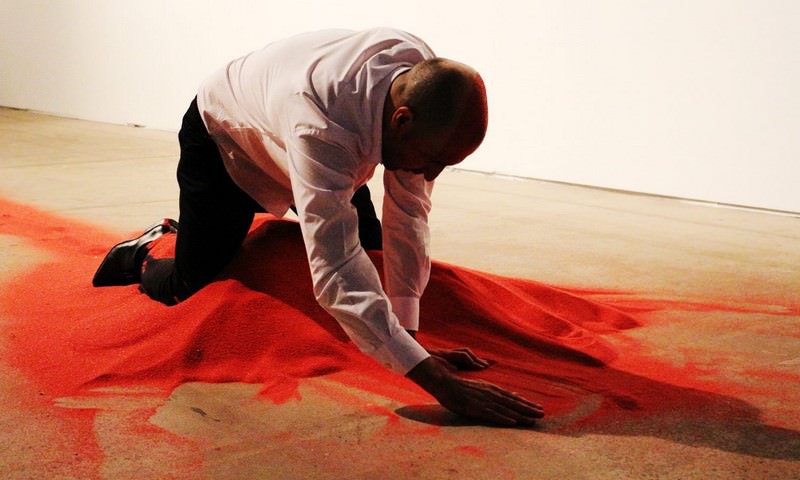 From the architectural elements that configure the environment, the program proposes that the performer seeks various surfaces, such as ramps, departures, failures, corners, support or borders, they can serve as support to accommodate themselves and initiate performance. Making use of 250 pounds of sand-colored red is defined a path approximately 10 linear meters, where one end DEMARCATES through sand the start point of the action and to the place where the artist will accommodate. About him is deposited all the remaining sand and, and, He will remain immobile for a period of 3 hours. In the next 60 minutes all the material is moved only with use of the body to the point of origin, with only traces-action memory (at the request of the Organization of the SP-Art performance happens during 2 hours).

WASTE proposed approach and understanding audience artist of the process of subjectivation, of which the body is both a producer and agent product. A body deposited under a mound of sand, symbol chosen to represent our daily attempts. "Everything you expect and that still lies buried, like a seed of something precious, ready to germinate, but that is deposited under a mound of sand, infertile, It is produced by our daily attempts ", explains D'angeli. 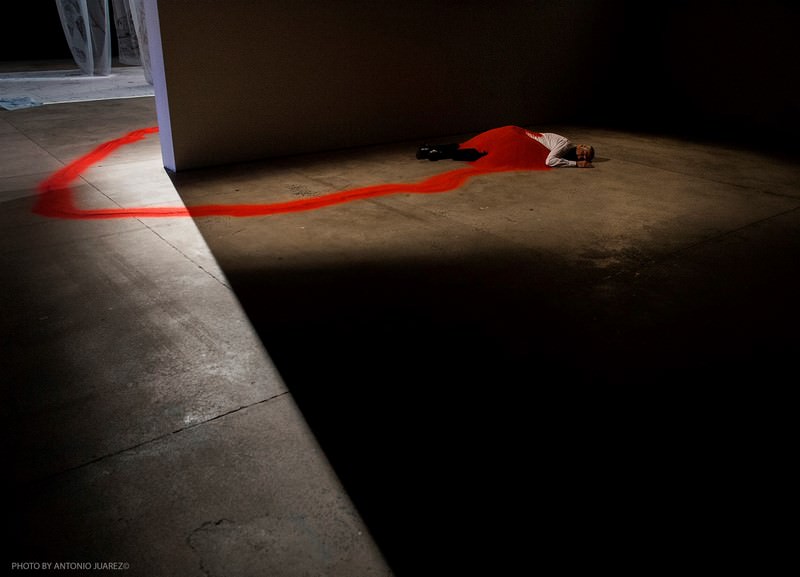 Alexander D ' Angeli's performer, actor and puppeteer with a degree in performing arts. Specialized in Dramatic corporeal MIME and Theatrical Stunt by Ecole International de Mime Corporel Dramatique Gestuel of Paris, under the guidance of master Ivan Bacciocchi. Interested especially for the languages more directly related to the body, and that operate at the intersection of performance and the theatre. He is the founder and artistic director of the soul 2. In 2015 held in Project Performance in Meeting the Sesc Campinas and bad habits of Artistic Intervention Space, in the city of Porto, in Portugal. Participated in the Festival Sesc Rio de Janeiro's winter and Virada Cultural in Belo Horizonte at Sesc Palladium with Listening to the Sheep Sleeping. He joined the Communal Land exhibition – Marina Abramovic + MAI as a facilitator of the Abramovic method. In 2014 participated in the occupation project “It's Right There” the Sesc Ipiranga with Listening to the Sheep Sleeping, performance with texts of the author and cartoonist Caco Gallardo. In the same year began the first stage of the project 436, long-term performance, where proposed to visitors of the Memorial of the resistance of São Paulo Assembly of four hundred and thirty-six paper faces in memory to the dead and missing politicians. In 2010 was responsible for the artistic interventions carried out in the Tietê Bus Terminal during the Virada Cultural, emphasis on “Valuables” and “Présence Decroux”. Participated with the performance objects parallel opening 29th São Paulo biennial promoted by Sesc Campinas. Creator and performer in “Molloy – The end is the beginning and yet continue”, Show sign Theatre solo inspired by the novel by Samuel Beckett, who participated in the show "Samuel Beckett – 100 years "organised by SESC Santana and joined the VII Shows Cariri of arts through the Revolving Stage of SESC Ceará. In 2016 the work 436 participates in the V Bienal de Bogotá Performance, in Colombia and Listening to the Sheep Sleeping in Barcelona Ground – International Festival of Solo Performance, in Spain.

Previous: Mondrian exhibition by Rosangela Vig
Next: BUT promotes free course: The food in art