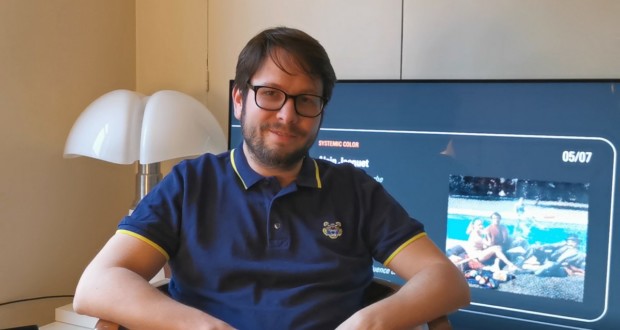 French Alliance of Rio de Janeiro offers exclusive French-speaking programming for the public to enjoy at home. Special highlight for the series of interviews with artists and personalities on cultural and social topics.

Olivier Mauco, video game developer, president of Parisian Game in Society studio is the second interviewee in the series and will share with the public his impressions of the relationship between art and video games and the future of this media. He will also tell about the development of the new game of video game “Prisme 7” launched in partnership with Center Pompidou, in Paris, Europe's largest museum of modern and contemporary art.

Discover the cultural tips of the French Alliance, through the AF website and social networks for all tastes and audiences! Has dance, exhibition, gastronomy, linguistic and other! Join!

Aliança Francesa Brasil launches a series of interviews with French-speaking artists and personalities around cultural and social themes, which is part of the cultural program broadcast online by the French Alliance, during this period of social isolation.The interviews in dynamic format are published on the social networks of the French Alliance Rio de Janeiro and other AFs throughout Brazil, and are fully available to all your followers with Portuguese subtitles. Among the themes addressed in the interviews, artistic production during confinement stands out, the future of media like the videogame and expectations for future trips to Brazil. The first edition of the series was with the artist and photographer, or what is she called, “Inventor of true stories”, Sandra Reinflet.

The second edition of the interview series will be with the video game developer, president of the Parisian Game in Society studio, Olivier Mauco, specializing in the development of games that address artistic themes, politicians, social and educational.

Mauco, who is also a doctor of political science and a professor at the French university Sciences Po, is the director and responsible for creating the Prism 7, new game launched in partnership with Center Pompidou, in Paris, Europe's largest museum of modern and contemporary art.

Building on the museum's vast collection of masterpieces and to initiate the public on the themes of modern and contemporary art, the game addresses the principles of art, as color and light details, in a playful and educational way. In the interview he will tell the public details about the development of the Prism 7 and its operation. In addition, the specialist will discuss other projects of the Game in Society studio in the area of ​​public governance and will be able to share his impressions of the relationship between art and videogames and the future of this media.

The third edition of the series will be with the singer Laurence Brisset, artistic director of Ensemble De Caelis, French capella singing group composed of five women. With performances suspended in Rio de Janeiro and other cities in Brazil because of social confinement, Brisset brings a sample of the group's work, their production during confinement and what can we expect from these female voices when they perform in Brazil in 2021.

Because of the epidemiological emergency that Brazil and much of the world live in this moment, the French Alliance cultural team has also prepared a French-speaking program that the public can enjoy at home during this period of social isolation. Through the AF website and social networks, several recommendations for shows will be made available, shows, movies, lectures, debates and other cultural events especially to face this moment of world crisis.

Check out AF's cultural tips and highlights of the week. Join!

The French Alliance launches a series of interviews with French-speaking artists and our first interviewee is the French artist Sandra Reinflet. Photographer, singer and author, she chose to summarize her profession as an “inventor of true stories”, because regardless of the support, his work always revolves around documentary themes. Sandra was in Brazil a few months ago as part of her VoiE.X project, series of portraits of artists who place the act of creation as an act of resistance in countries where living with art is a challenge. She tells us how this work was carried out in Brazil, what social isolation has been like for her in France and more.

The cefran is zarbi, non? Maybe you are feeling a little ouf for not understanding the previous sentence. The fact is that even if you are fluent in French, may not know the verlan. The words “céfran”, “Zarbi”, “Phew”, are part of the vocabulary of this kind of French slang, widely used by the French in informal contexts, especially the younger ones. Professor Daniel Bartholomeu explained to us how this linguistic construction works and, if you want to know more, we published on our blog an article about the origin of Verlan!

TIP: Exhibition by artist Claudia Andujar with the Cartier Foundation

Who presents our cultural tip today is Marcia Saddi, general director of the French Alliance of Campo Grande. On video, she talks about the exhibition by the swiss-brazilian artist Claudia Andujar, organized by Fondation Cartier. The artist, that from a decade of 70 fight in defense of the Yanomami peoples, presents a beautiful work as a result of his immersion in the Amazon Forest. With the isolation measures imposed worldwide, the face-to-face exhibition had to be closed but Fondation Cartier prepared a hotsite dedicated to the artist. In addition to the photographs, you can check out podcasts, videos and a biography of the artist. Check it out at

Julie Mailhé's cultural tip, director of AF Niterói, is for those who do not yet know the radio France Culture. French radio, dedicated to topics related to culture and society, makes your programs available on your website so you can listen whenever you want. Our special recommendation is the Les Bonnes Choses program, presented by Caroline Broué, is dedicated to gastronomy and food. There are several episodes with different themes, interviews with chefs and much more available at:

You already know the Numéridanse website? The platform is a digital dance video library, organizada pela Lyon Dance House. On the website www.numeridanse.tv you will find countless resources, from shows, documentaries, interviews, and much more of the dance universe. Justine Delefortrie's tip, general director of AF Belém, is to start at Cabane de la Danse, video series where choreographers teach choreography for you to follow and dance at home. Guaranteed fun for the whole family! Access at

It has tips for all tastes! Check!

About to turn 135 years of activities in Brazil, the French Alliance is a reference in the language and, no doubt, the best-known institution in the world, when it comes to the spread of the French language and Francophone cultures. Has, currently, more than 830 units 132 countries, where they study about 500.000 students. In France, it has schools and cultural centers for foreign students. Brazil has the world's largest network of French Alliances with 37 associations and 68 units.