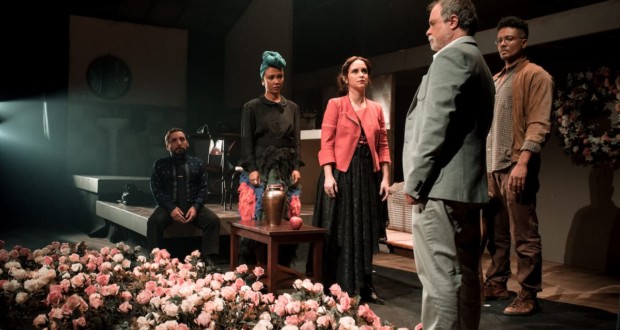 Presented by Ministry of Tourism and Bank of Brazil,

The show discusses how much we currently outsource our personal relationships.

A Teatro II of CCBB Rio de Janeiro, receive from 20 November to 19 of december, with representations from thursday to saturday, at 19h, and Sundays, at 18h, the premiere of the show “Pá de Cal (Ray-lux)”, dramaturgy by award-winning author Jô Bilac, directed by Paulo Verlings, directed by Cia Teatro Independente and cast formed by Carolina Pismel, Isaac Bernat, kenia barbara, Orlando Caldeira and Pedro Henrique França. The project is sponsored by Banco do Brasil through the Federal Incentive Law.

A plot of "Pá de Cal (Ray-lux)” part of the death of a central character, that is, he is absent. The same happens with her sisters, who send representatives to the “family” meeting in which the fate of the father of this family and the fate of the mother of the deceased will be defined. (an ex-family employee), who also sends a legal representative. The dead person is also represented by a person with whom he lived in foreign lands. In addition to a traumatic death, the piece deals with the outsourcing of responsibilities and how these representations interfere in the proper handling of issues. All the action takes place in the house where the patriarch lives, location that is the focus of a dispute over ownership, revealing divergent interests between the parties. Unexpected conflicts emerge from this encounter. With the passage of time, the relationships between father and his children – represented – are revealed to spectators increasingly clear and latent.

– The show narrates a “family” relationship from a different perspective. Through the representatives, we discuss how much we currently outsource our relationships -, comments director Paulo Verlings, also responsible for the argument and idealization of the play.. – We went through issues like guilt, lack of dialogue and affection, from a tragic event.

With “Pá de Cal (Ray-lux)” Cia Teatro Independente focuses on a delicate topic, but emergency and for life. Brazil is against the world trend in relation to suicide rates. WHO data show that around here the suicide rates were 7% bigger in 2016, last year of research, than in 2010. The global index fell by 9,8%.

The expression “Shovel of Lime” means that it will make a last reference to an unpleasant subject. "Ray-lux" refers to the name of such an expensive funeral urn, that costs the price of a car.

As for interpretive language, director and cast focus on exploring naturalistic performances, but unrealistic, with intense physicality, to displace the viewer, through an everyday aesthetic relationship of action, to the universe of cathartic bonds on which the family relationships discussed there are based.

For the casting of the cast, the Company thought of very different archetypes to form a Brazilian cast, with many diversities, real characters and believable people. "We put on stage the real portrait of Brazil's miscegenation", comenta Verlings.

On 19 last october, the Independent Theater Company completed 15 years of activities. Created in 2006, jo bilac, Carolina Pismel and Paulo Verlings have been part of the Company since its formation.

The death of the youngest of a broken family causes a meeting where only family representatives attend and they will be the ones who will decide the fate of the patriarch and the mother of the deceased, a former employee, who also sends a legal representative. The outsourcing of responsibilities drastically interferes with the handling of this family's affairs.

The Banco do Brasil Rio de Janeiro Cultural Center is open from Wednesday to Monday (closes tuesday), from 9am to 7pm on Sundays, Mondays and Wednesdays and from 9am to 8pm on Thursdays, Fridays and Saturdays. Public entry is only allowed with presentation of proof of vaccination against COVID-19, temperature measurement and use of masks. It is not necessary to collect a ticket to access the building., tickets for events can be collected in advance on the Eventim website or app or at the CCBB box office.