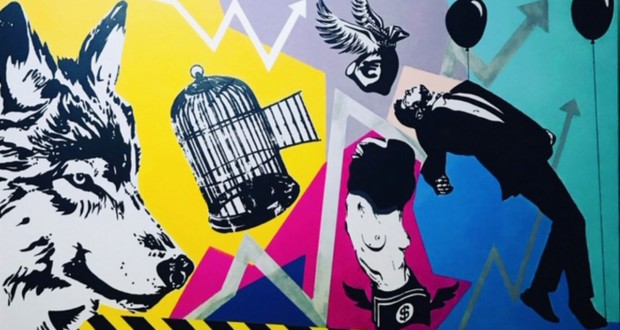 “A minute and a half with head "consists of paintings, sculptures, installations and mixed media works, and proposes an open dialogue on the television news and current media

A Zero Gallery inaugurates "One half minute with heads”, visual artist paulistano Ricardo Muñoz, curated by Francisco Rosa. Individual comprises 18 Artworks - Painting, sculpture, installation and mixed media - and, by languages ​​intertextuality, It proposes an open dialogue about television journalism, the current media, of developments and technological revolutions and the relevance and / or pertinence of a fact. For this, assumes that art, with his license to subjectivities, suggestions to, points, It indicates and proposes aesthetic / poetic experience as a response to what happens in the world and its future.

Inspired communication – understood as spoken human expression, written and visual, inserted in a diversity environment -, arises production Ricardo Muñoz. For this exhibition, the artist has blended his experience as a journalist with his artistic experience, in an open dialogue between the two professions. In this sense, proposed 15 journalists to write a free theme text, but that could be told in just a minute and a half. From these texts, arises production, using multiple languages ​​to create a visual reading on each topic. By doing so, the artist makes the co-authors of the works journalists, since their thoughts have become compositional elements of the created images. Cognition and enjoyment, interaction and flow, interaction and dialogue.

To respond to world events is elementary for journalism, and we know that such responses are distinct from those offered by science, the philosophy, Religion and the Arts. Made in report form, news journalism is subject to verification and coverage of facts and natural events, politicians and society in general. “Yet, the outside world may not be known and fully described the large number of singularities and particularities. In addition, the reality is organized by experience, repertoire and culture. It is his image reflected in the work and the news and reportage, for example, the world are transformed into text and images”, comments Ricardo Muñoz. 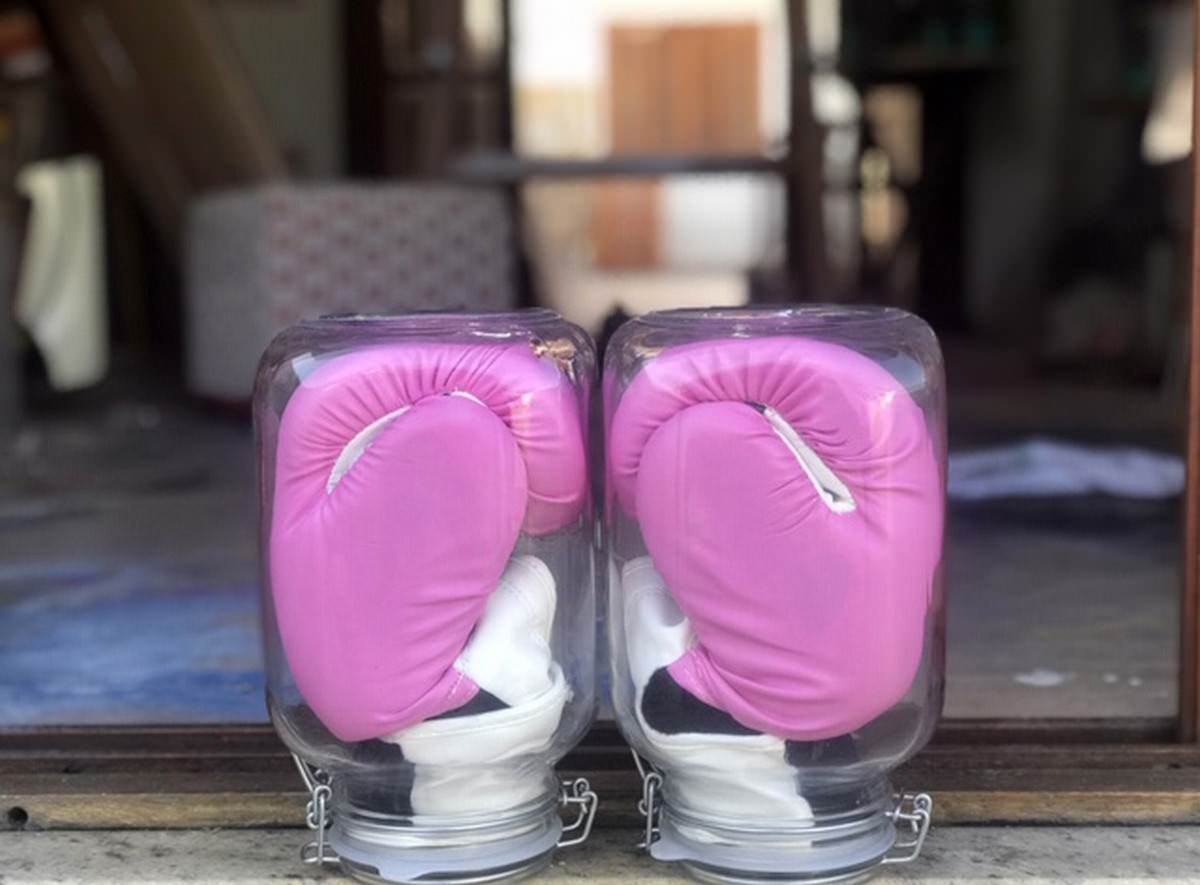 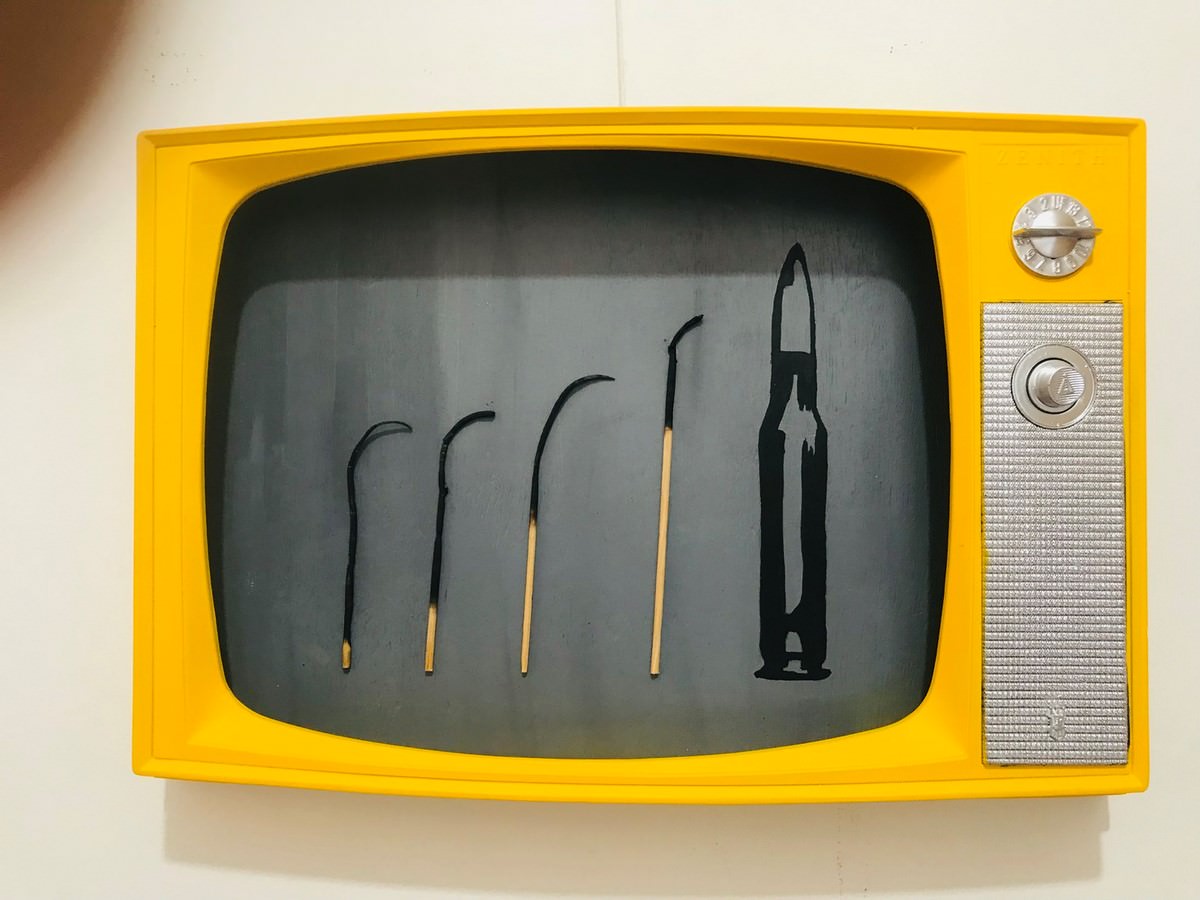 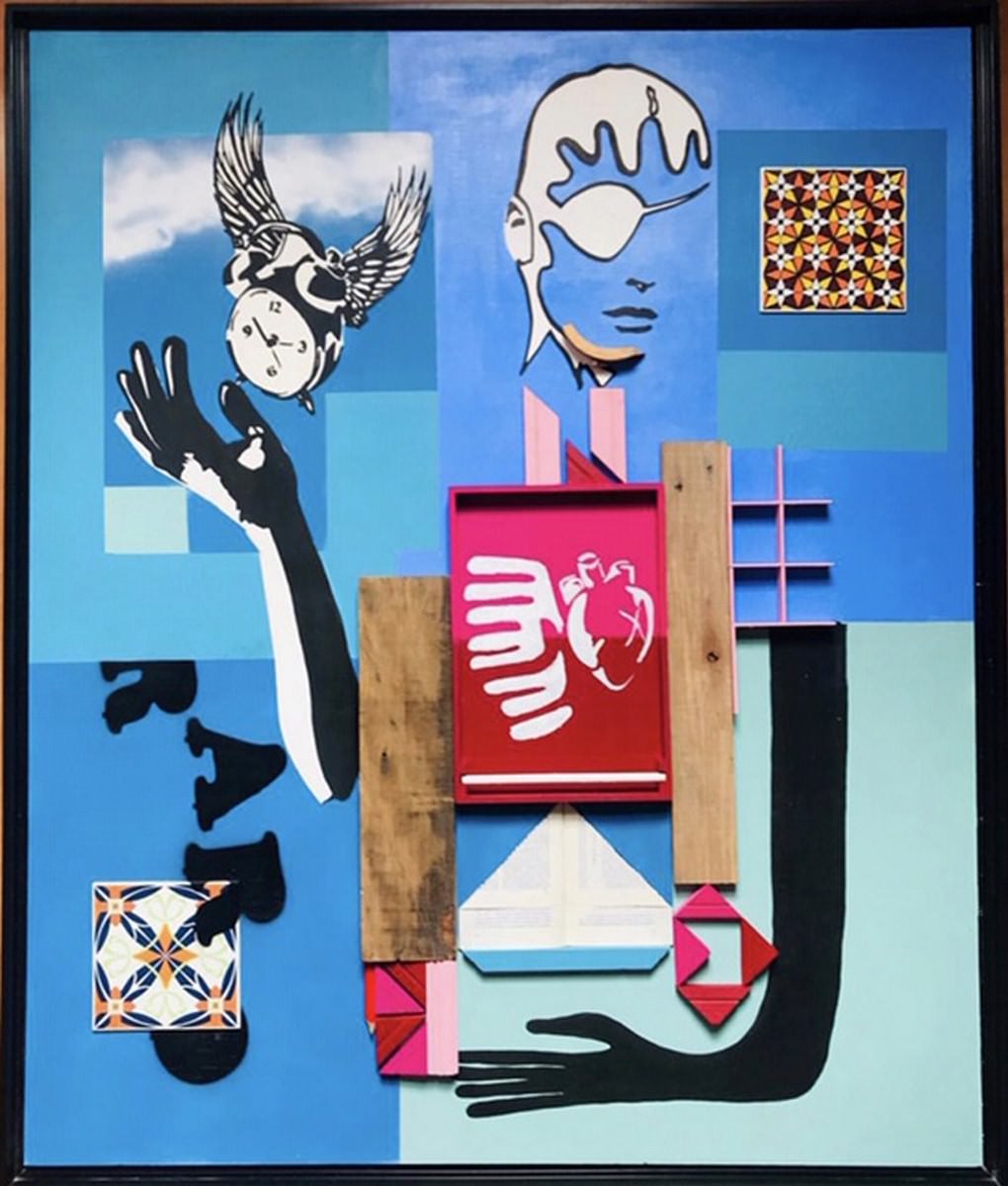 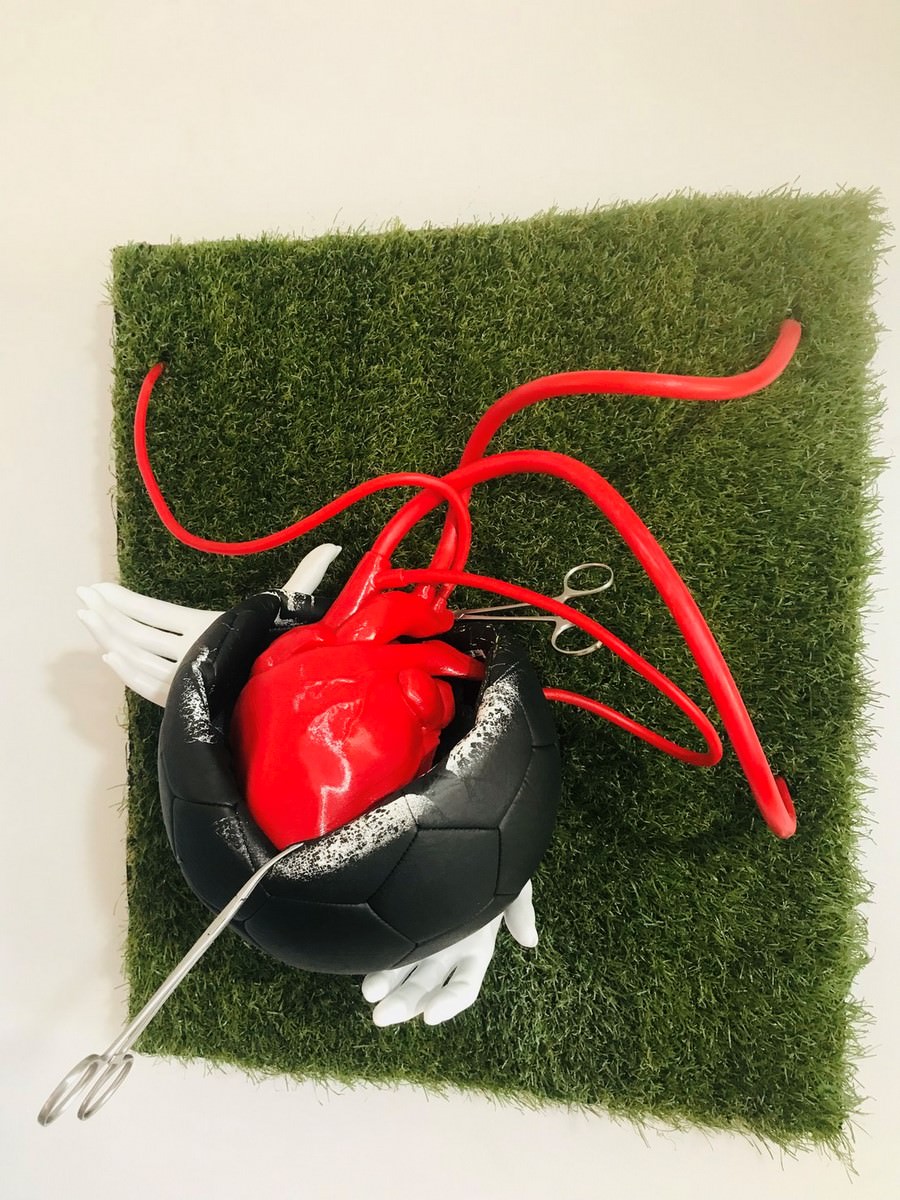 The title “One half minute with heads” is an expression used in newsrooms of TV news, which means advertising matter, break the news, show the pictures and complete the report in a minute and a half. In the words of Francisco Rosa: “The work of Ricardo Muñoz presents a vast visual vocabulary and matérico. It offers the public a free transit in the field of enjoyment and signals for various socio-cultural issues through redefinition and displacement of objects function, the use of signs and language of intertextuality, with technical precision and indexical plasticity of his poetic”. 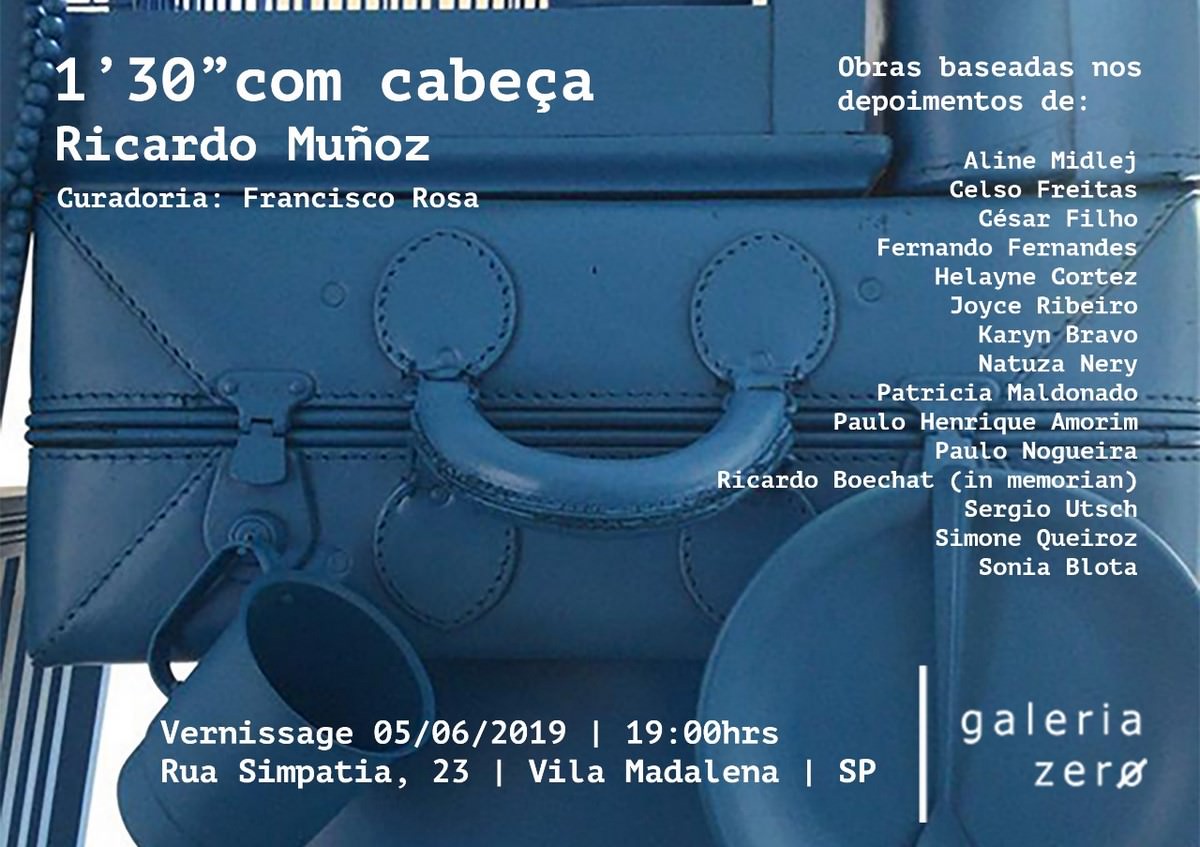 Degree in Journalism. He worked on major television stations in the country and also studied Art History. In his career, personal and professional experiences built a way that goes beyond the simple presentation of traditional plastics resources. In his artworks, the artist makes a unique fusion of conceptual and plastic subjects. Binds chromatic and structural different contexts of culture and art as surrealism, graffiti, pop art and conceptualism. The result is a strong work, with a particular identity and visual representation.

A Zero Gallery It comes up with the purpose of consolidating in the São Paulo cultural circuit as a place where art is seen and felt as something that is part of everyday life of people, mainly because not live in an isolated environment of white walls, but in a city where different colors and nuances predominate in tandem with the works of art. Pedro Paulo Afonso, economist, It operates in the financial market in the investment field for over 10 years, working for big institutions like Santander Asset Management, Nest Investments, Fidúcia Asset Management e Mirae Asset Wealth Management CCTVM. Art collector some years ago, He found a way to support both new and established artists creating a space for the promotion and development of contemporary art, thus being able to devote to his hobby and professionalized it. One of the main goals of Zero Gallery It is to bring national artists, represented by it, to various locations of the city and the world, thus being able to expose and promote a wide range of Brazilians living artists.