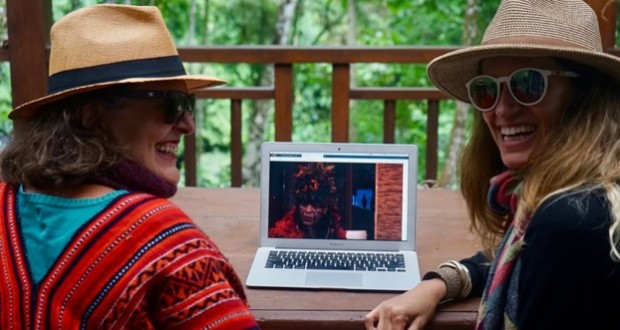 Celina Sodré, Celia Maracajá (on the body) and Clara Choveaux. Photo: Leo of the Jungle.

MURUNDU OF BOOKS, I.R.M.A. - Russian invasion in the Atlantic Forest

A Contemporary Indigenous, a White Man and the spirits of nine Russian authors meet in the Atlantic Forest on a night of resurrection

In a clearing of the Atlantic Forest, a Contemporary Indigenous and a White Man, sick, drink Ayahuasca. The indigenous woman starts a shamanic healing ritual and from the moment she finds a strange stone – actually a big package, a ‘murundu’ of books, the authors of these books begin to appear before her. Russian artists (writers and filmmakers) appear before the Contemporary Indigenous and speak, pray for her, pray for the White Man, about his ideas about the relationship between man and nature, thoughts and feelings.

“Murundu de Livros” is a long and, at the same time, the first episode of the series I.R.M.A. - Russian invasion in the Atlantic Forest and is in the editing and finalization phase. The film can be seen in guest sessions, online and in person, From may. The work bears the mark of feminine strength: besides having as its main character an indigenous woman played by the actress Célia Maracajá, I.R.M.A. is directed by Celina Sodré and Clara Choveaux and has the musical direction and the original soundtrack, signed by another woman, to pianist and composer Raisa Ritcher.

The work is the debut of Celina Sodré and Clara Choveaux as film directors and, also, brings the launch of the brand new I.R.M.A.. The project won, in December 2020, the promotion of DEVELOP CULTURE, Edital Aldir Blanc, of Secretary of Culture of the State of Rio de Janeiro. Over 30 actors participated, in the second half of February, of filming that first episode, Murundu of Books, inside a forest, in the carioca mountains, in Nova Friburgo (RJ). To plot, night, mixes the Atlantic Forest, with Russian characters, environmental issues and literature.

Between trees and around a campfire, personalities like Fiodor Dostoievski, Chekhov and Tolstoy. In addition to Célia Maracajá as a Contemporary Indigenous and Henrique Gusmão as a White Man, participate in the Bruce Gomlevsky plot as Vsevolod Meyerhold, Jefferson Schroeder as Anton Chekhov and Miwa Yanagizawa as Akira Kurosawa. Are in all 32 actors, who work in partnership with theater director Celina Sodré at Instituto do Ator, located in Lapa (RJ). Much of this cast plays the characters in the books and films of the authors and filmmakers who are in the ‘murundu’ titles.

In this script, developed by Celina Sodré and Henrique Gusmão, the remedies are the books themselves and the cure comes from the words. E a temática do meio ambiente ultrapassa as fronteiras da ecologia dos noticiários jornalísticos e passa para o âmbito artístico. Quem assina a direção de fotografia de I.R.M.A. is Dudu Mafra. The production of the series with the four episodes is part of the celebrations of 30 years of Studio Stanislavski, theatrical company founded in 1991, by Sodré, in Rio de Janeiro.

Cast of Murundu of Books: