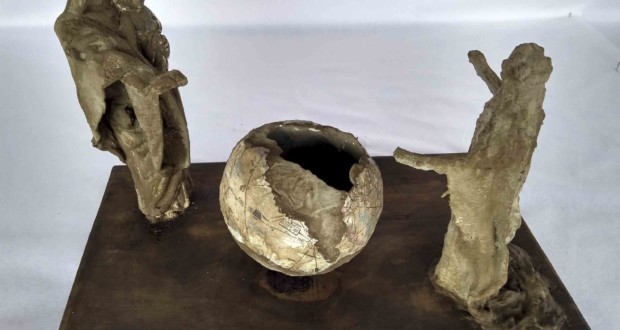 A Museu de Arte Sacra de São Paulo – MAS / SP, institution of the Department of Culture and Economy of the State of São Paulo Creative, inaugurates "anchorage – The form and shape”, mining artist Vladimila Veiga, curated by Ian Duarte Lucas. The show takes place in the museum Taipa Room, and comprises 11 sculptures – plaster, concrete, grit, iron and other elements -, which are based on figures of the Catholic liturgy, shaped in molds produced by his grandfather, the sculptor Carlos Veiga. By revisiting the story of his family, the artist sheds light on wider processes of society, beyond religion, inserting in contemporary figures that populate the imagination of the population, which sometimes goes unscathed to the signs that are embedded in the iconography of each picture.

In 2008, Vladimila Veiga He received the patterns of sacred art images that his grandfather had produced throughout his artistic career. Because of the large volume - 240 parts -, the molds stored in a shed which occupied space in the family site. “thought: 'When I come back to the site, here a 8 months, I will catalog, to record and take pictures of everything '. So that now, to my surprise, little left of these parts. Rodents destroyed much. I was only with 84 molds. Anyway, a day to be forgotten… a frustration, despair”, comments on the artist. So, He distanced himself from the project for two years, because it lacked courage to reconnect with a painful memory. After overcoming these events, Vladimila Veiga merged 8 in plaster and the result motivated to break some anxiety to see all that work stopped images, without life, no history. In his words: “And how did all that and it is part of my story, because it was over there I had my first contact with art, at the age of 13 years old. He spends the afternoons in the studio of my grandfather. And he left a lot more than your job, left link, also left affection, let dreams. He passed away at 94 years, lucid, working in his studio”.

Thus, Vladimila Veiga He realized what was their way, on a need to express all your questions, copyright way, bringing together two molds in a single image and creating, with the molds of his grandfather, new forms. For the show in MAS / SP, are presented 11 these sculptures, of which 7 They were produced exclusively for this individual. Based upon the concept of symbolism, free or moral values ​​immoral, the title "anchorage"Expresses a sense of empowerment, something which is and continues. “unanswered questions that exist in many questions. Figures allowing further reading. I live with these sacred images for many years, I have relevant conversations and sometimes fantasized, very individualized experiences”, explains the artist. As for the technical criteria of this series, your choice to work with plaster allowed to interfere with the posture, positions depicted in, like open hands, heads up, holding hands.

By seeking inspiration in the molds and their representations in the Church, Vladimila Veiga also seeks his own interpretation of these images, with a new look, e-mail, with no religious claim. “The artist of these templates not to produce again sacred images, but to investigate the relationship between the icons and symbolism that each figure holds up to this day, recombining different parts of each. In this way the artist anchor these new figures through a relationship with the past, to revisit the mold and present them reconfigured, placing them in a historical room and also full of symbolism of how the city and the Brazilian territory occupation process was configured”, comments Ian Duarte Lucas.

A Museu de Arte Sacra de São Paulo, institution of the Department of Culture and Economy of the State of São Paulo Creative, It is one of the most important of its kind in the country. It is the result of an agreement signed between the State Government and Mitra Archdiocese of Sao Paulo, in 28 October 1969, and its installation date 28 June 1970. Since then, the Museu de Arte Sacra de São Paulo He came to occupy wing of the Monastery of Our Lady of the Immaculate Conception of Light, on Avenida Tiradentes, downtown São Paulo. The building is one of the most important monuments of colonial architecture São Paulo, built of rammed earth, rare remaining example in the city, last farm convent city. It was listed by the Historical and Artistic Heritage Institute National, in 1943, and the Council for the Defense of Heritage, Architectural artistic and the State of São Paulo, in 1979. It has much of its collection also listed by IPHAN, since 1969, whose priceless heritage includes relics of stories in Brazil and worldwide. A Museu de Arte Sacra de São Paulo holds a vast collection of works created between centuries 16 and 20, counting with rare specimens and significant. There are more than 18 thousand items in the collection. The museum has works of recognized names, as Frei Agostinho da Piedade, Frei Agostinho de Jesus, Antonio Francisco Lisboa, the "Aleijadinho" and Benedito Calixto de Jesus. Noteworthy are also the collections of nativity scenes, silverware and jewelery, Lampadarios, furniture, altarpieces, altars, clothing, liturgical books and numismatic.

Previous: A2 Angelo Aquino + Mul.Ti.Plo, in the Valley of the Vines
Next: Sacred Art Museum of Sao Paulo displays individual Oskar Metsavaht