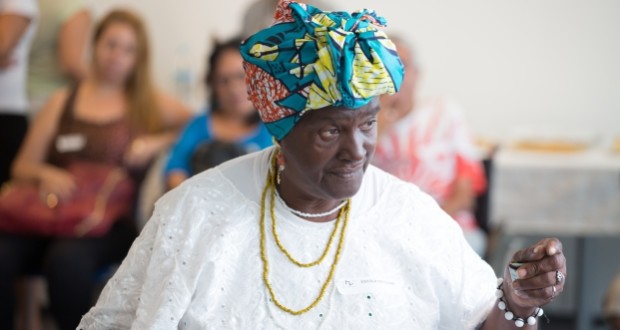 The Museu de Arte do Rio, under the management of the Institute Odeon, It opened to the public on 16 November exposure "Little Africa and the SEA Tia Lucia - Tribute to Lucia Maria dos Santos".

In close relationship with the sample "Women in the collection SEA" the exhibition highlights the artistic power Tia Lucia, icon of Rio's culture, especially in the area known as Little Africa. Curated by Izabela Pucu and Bruna Camargos, the SEA Education Coordination, the show is part of the celebration program of the five years of the institution, that opens a new exhibition space in the library of the School Look, consolidating the museum's relations with the territory in which it is located.

Late in September 2018, Bahian Lucia Maria dos Santos has always participated actively in the activities and celebrations in the streets and institutions of the port area, Local living since coming to Rio de Janeiro, a child. nanny, function that began to exercise with only 8 years, the teacher of arts and crafts, Aunt Lucy occupied the city and the cultural spaces and introducing subverting the ways of being and living.

How would the artist in the newspaper edited in the SEA Neighbors program: "The first time I was in an exhibition was inadvertently. I was catechism teacher. When I returned from the Candelaria Mass with the children they escaped and entered the Centro Cultural Banco do Brazil. I had to go there to seek them (…) Museum was rich thing, It was very difficult to get. It was that great and beautiful thing, no one. The museum is worldwide and at the same time is not anyone, one can not deny access to people ".

As noted by the exhibition curators:

"Many years later, in his intense relationship with SEA – for her, sign of unity and also your home – Aunt Lucia performed it the long awaited appropriation of cultural spaces for people of your surroundings and the city, acting not only as a public, but as the protagonist of numerous workshops and festivities, as well as exhibitions The Samba Rio: strength and reinvent, still in theaters. By inventing herself as an artist, to boldly overcome the concrete and symbolic barriers that separate the popular culture of artistic expressions legitimized, Aunt Lucy teaches us to build new ways of being and doing for cultural institutions. Ways of being and doing that, in its best condition, re-qualify the function of art and help us build a more democratic society, diverse and egalitarian ".

"Little Africa and the SEA Tia Lucia" It presents a set of works of the artist, as paintings, drawings and objects, plus videos, documents, photographs and personal items. The tribute was designed in partnership with SEA Neighbors, at the monthly meeting called Coffee with Neighbors, in 06 October this year. Part of the items in the exhibition were brought by local residents, during a collective gallery talk, occurred on 21 October.

at the meeting, each of those present recalled the history of this iconic woman, from objects that keep their affective memory. After the conversation, all came out in procession through the small African region, packed by members of Afoxé Son of Gandhi and Carimbloco. In Pedra do Sal found the procession samba school members GRES Groundhog River, where there were speeches and tributes. The whole experience was filmed by the SEA team and gave rise to the video which is also part of the exhibition.

Aunt Lucy left works throughout the city and held exhibitions in New Black Institute and Cultural Center Jose Bonifacio (CCJB). Your image is recorded on the Valongo wharf and on the staircase of access to the Morro da Conceição, the Liceu Lane, behind Joseph Building Turn (In the evening).

The exhibition confirms the movement by the Rio Art Museum by the appreciation of the production of women artists, which includes the opening of the exhibition "Women in the Collection SEA", which was also inaugurated in 16 November and will occupy the museum's exhibition hall until May 2019.

The SEA library is open from Tuesday to Saturday, das 10h às 18h, and admission is free.