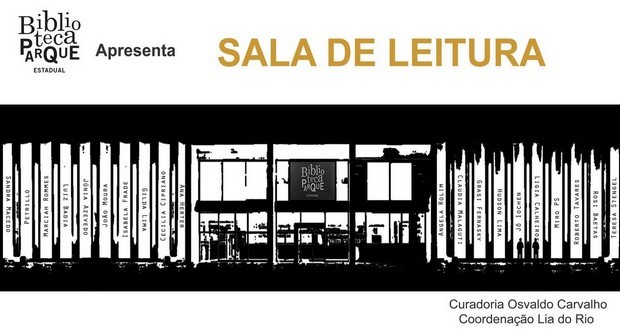 Curated by Osvaldo Carvalho, the show opens on 2 August, with free admission.

The exhibition gathers 50 of various technical works: painting, drawing, sculpture, photography, assemblage, collage, videoart, engraving, object and installation. In addition to the exhibition space, the event provides other cultural activities. Na opening, during Friday afternoon, a 'flash mob "with artists and guests aims to surprise passers-by in the street, in front of the library, at Avenida Presidente Vargas. Another attraction of the vernissage is the performance of Isabela Frade. Throughout the exhibition will be offered to the public art workshops, conversations and shows videos.

According to curator, the idea is to bring visitors to the exhibition to understand most of what is behind the works exhibited. "As Paulo Freire, It requires the ability to read between the lines, otherwise, when oppressed, We end up acting like our oppressors. The individual who understands their reality is able to find solutions to transform it, breaking with the fate of repeating the mistakes of the past ", explains Osvaldo. "The exhibition brings the reading room as a place of this event, the transformation of the subject that seeks to understand and change the world around them ", he concludes. 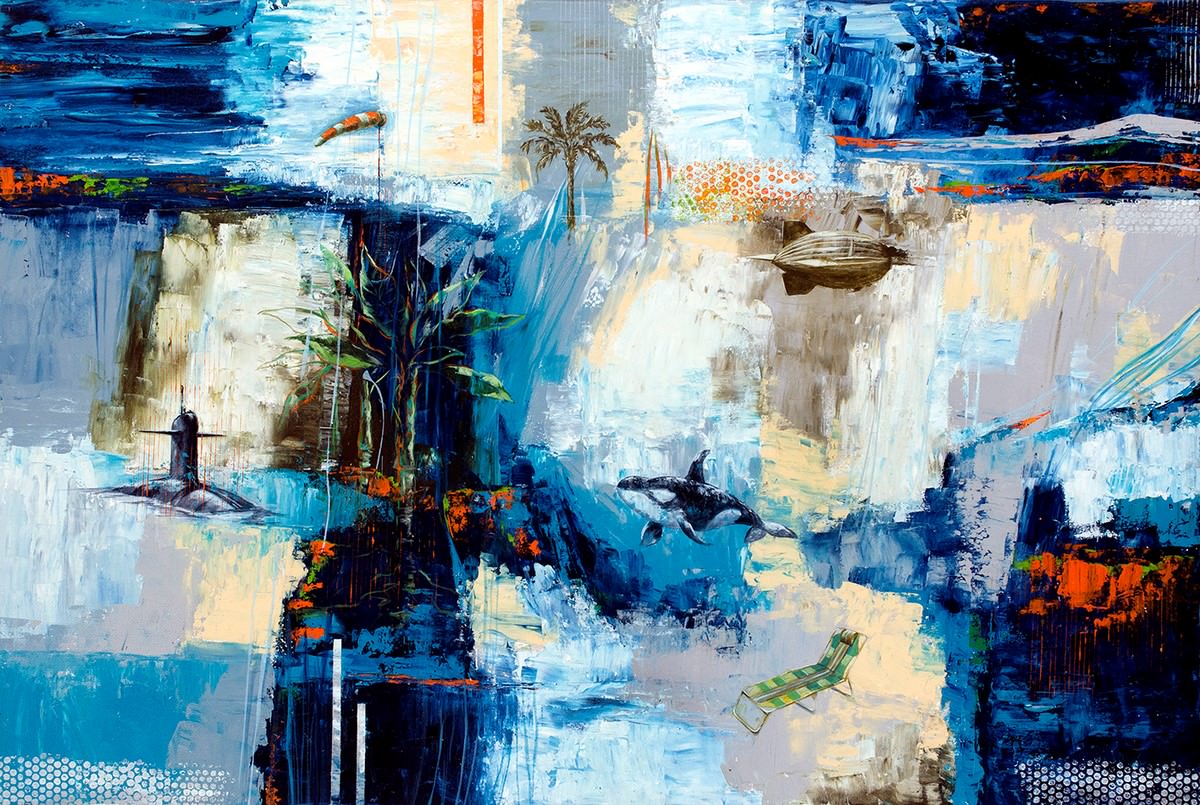 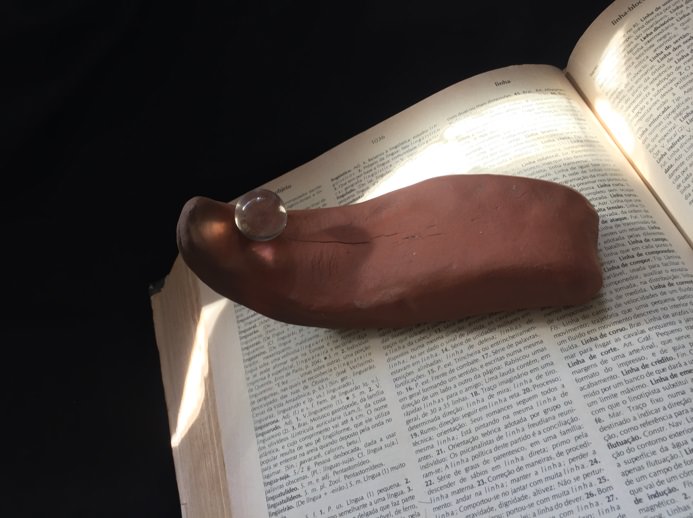 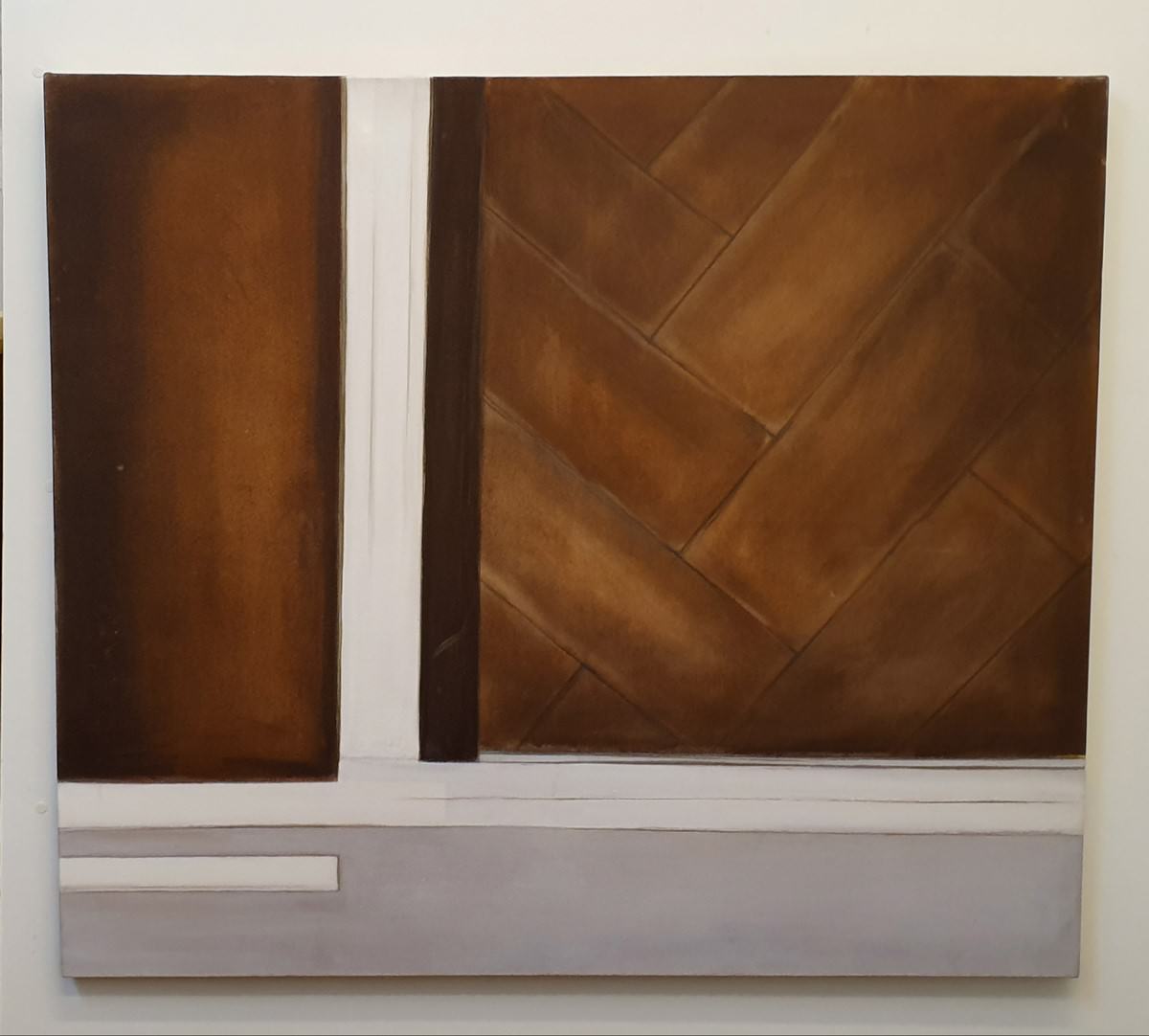 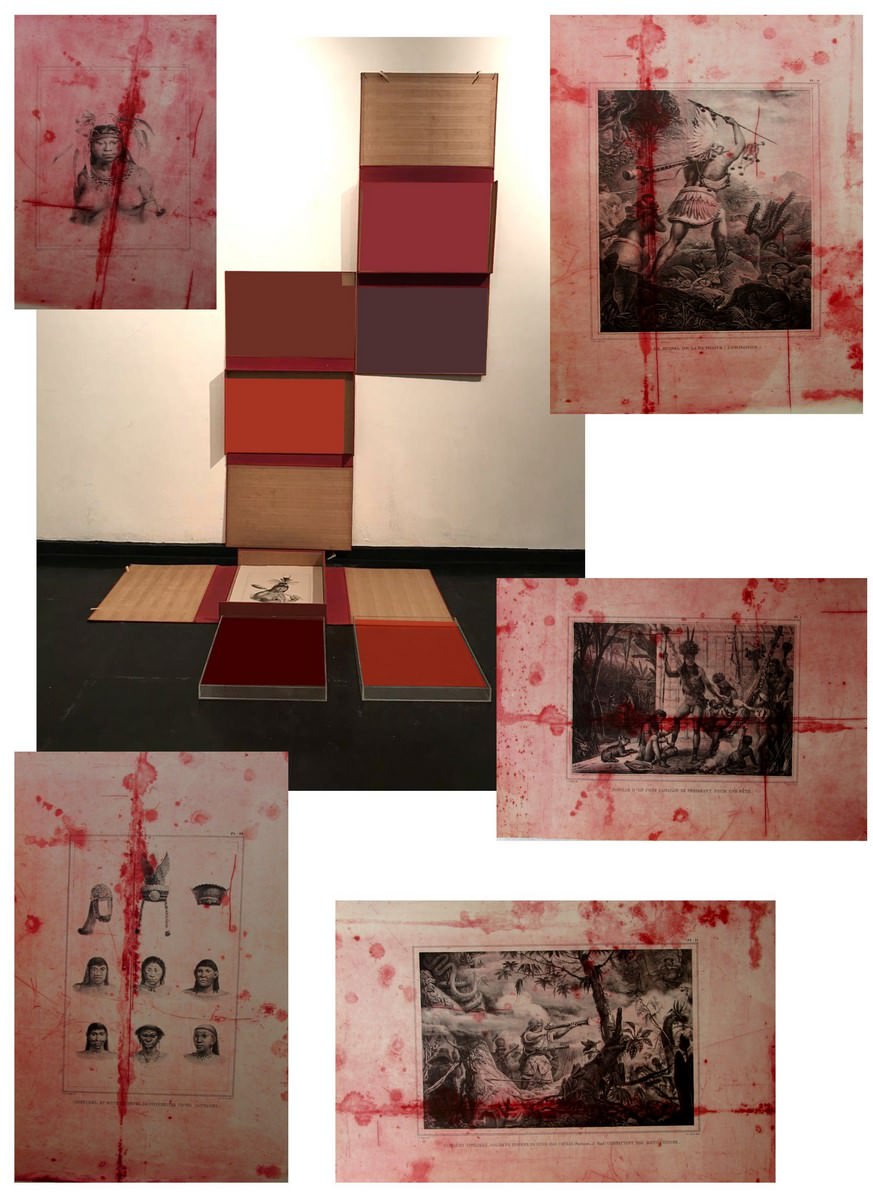 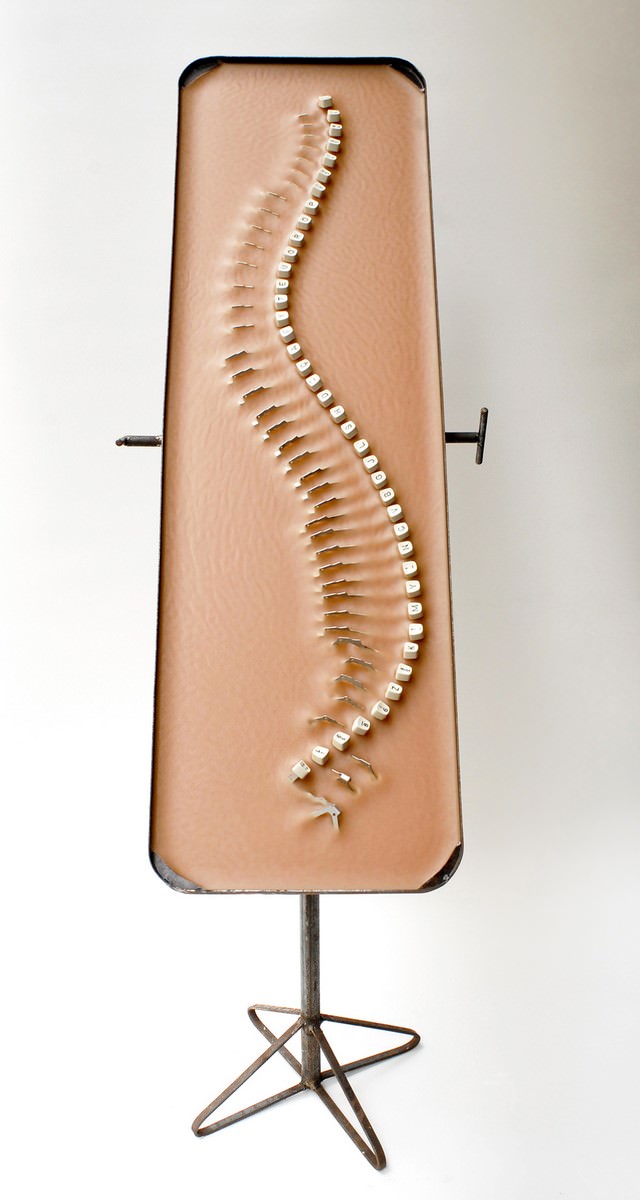 Ana Herter – Conducted major studies in the School of Visual Arts of Parque Lage focused on painting, materials and theoretical courses. Currently, develops his work in his own studio. Participated in solo and group exhibitions and has works in collections.

Cecilia Cipriano – He made college career as a teacher and researcher at the UFRJ Chemistry Institute. The most effective approach to art happened when he became a student of the course of Visual Arts at the School of Fine Arts of the UFRJ, and narrowed the School of Visual Arts of Parque Lage, 2014-2015. exhibitions 2018: soon gallery, Convent of San Francisco workshops, Montemor-O-Novo (Portugal) - Photo Essay Appeal to Sal; Cultural Center of the Federal Court - We're All Equal; Municipal Center Helio Oiticica Art - June 2013 – 5 years later; Municipal Center and Ruins Park (RJ), turbulence. In 2015: Itau Cultural Institute, project contemplated by the Directions Program - The Court.

Claudia Malaguti – Born in Rio de Janeiro, in 1964. It training jewelery, visual programming and expertise in art philosophy. in Florence, where he started his studies with molten metal, He received jewelry degree from SACI (Studio Art Center International). Held group and solo exhibitions, in Brazil and abroad. Currently, lives in Rio de Janeiro. In his studio, waxes and metal search, in pursuit of their own symbols and signs. His artwork takes an unpredictable feature in dealing with the transformation of objects.

Fernasky Subramanian – Lives and works in Rio de Janeiro. He graduated in Education and Arts. It is post-graduated in Teaching of Art and Art Therapy in Education. In addition to plastic artist, acts as a teacher of Visual Arts. In search of the most potent means to express their conceptual discussions, produces works in languages ​​such as painting, engraving, collage, photography, video, installation and urban intervention. The repetition of the medium is present in the material as lines appropriation, wires and tapes, generating new frames, volumes, plans, codes etc.

Hudson Lima – Volta Redonda Natural (RJ), He was assistant to various artists, as Jorge Guinle, John Grijó, Charles Watson e Tony Moore. Along 18 years, He worked as a prop man in various samba schools. No social field, It was dynamic in art communities such as hose, Ant, Macaco etc. Today is dedicated to his original work and also works with settings and props repairs in samba schools, during Carnival.

Isabela Frade – Degree in Arts from PUC-RJ, with master's and doctorate in Communications from the School of Communication and Arts of USP and post-doctorate at the Institute of Fine Arts at the UNLP, Argentina. Teaches in the Bachelor of Arts Course and the search line Art, Performativity thought and the Graduate Program of UERJ. Coordinates the extension project Viva ceramic, in cross-community dialogues UERJ and Hose, integrating women's art collective The Circle. Develops sculptural works in performing approaches.

The Iocken – Participated in group and solo exhibitions, as exposure Rio Article, in Contemporary Art Fair (RJ, 2012). Recently, exhibited at the Cultural Center Post Niterói (RJ, 2019). The artist undertakes research of unusual materials to the painting technique, as the use of burlap. His expressiveness provides the lyrical fruition, now referring to Michelangelo Classic, now referring to the contemporary of the intricate arabesques.

Jennifer Azevedo - Carioca, He graduated in Social Communication (PUC-RJ). His artistic work of the professional experience in advertising and marketing, having begun by writing. In 2014, launched the romance “Being yourself " (Ed. Circuit), then he went on to create objects and assemblages. In 2018, held individual, the Cultural Post Niterói, Next conference on Solar Art Gallery (RJ). He participated in artist residency in the House Duna (roof). Frequents the course of João Carlos Goldberg, no Parque Lage (RJ); and makes project tracking with Lia River.

Marciah Rommes – Born in Rio de Janeiro, He graduated in Psychology at UERJ, having started his career as a visual artist from studies in painting and photography. Attended free courses at the School of Visual Arts of Parque Lage. In 2018, He attended the Art Residency in cyanotype, no LabClube. Participates in research groups and development projects in visual arts at the Atelier Printed Project, Studio in the OKO Gallery Contemporary Art and integrates the group discussion "Speaking of Contemporary Art". Since February 2019, attends graduate in Art History and Visual Culture, Candido Mendes University.

Miro PS – With other artists, in 2009, created the Free Space Pangea, in Pedra de Guaratiba (RJ), which divides the authoring environment. Since 2010, develops artworks. His production speaks of "the need and dependence on technology", as well as the adaptation, survival and its pleasures. Participated in national and international exhibitions, individual and collective in galleries and cultural spaces. MBA in Management, Design and Arts, and participated in several workshops and lectures.

Petrillo – Was born in 1975, in the city of Valencia (RJ). He graduated in Arts from UFJF and currently resides in Juiz de Fora (MG). Since 2002 He has participated in 26 individual exposures, in places like the National Museum of Fine Arts (RJ), The Federal Justice Cultural Center (RJ), National Postal Museum (Brasilia) etc. Among the more than 30 group exhibitions, exhibited at MAM (RJ), the Art Consortium Buenos Aires (Argentina), among others. The architecture and spatiality are very important aspects to be observed in his work, in which the geometry and lines dictate the pace of the narrative of his plastic / poetic search.

Roberto Tavares – One of the founders of the Collective Imaginary Peripheral, She participated in several solo and group exhibitions, with emphasis on: Cube In Mar-Ten Cubed (Lisboa, Portugal); 2South American Biennial of Contemporary Art Printed (Rio / Córdoba); Abstract and Geometric, MARCO (Museum of contemporary art of Mato Grosso do Sul); "We are Generation 80 - Some years later", and "Donation", the Gallery Zagut (RJ); reverberation Abstract, Artist Space (RJ). Integrates the contemporary art space OLUGAR, in Bhering Factory.

Rosi Baetas - He holds a doctorate in Chemical Engineering, MSc in Industrial Engineering and a degree in Chemical Engineer, UFRJ. Coordinated courses on innovation at Masters level. Conducts studies and art works in the studio of ÖKO Gallery and Workshop 3D, Lage Park. He made free courses in art history at the University Cândido Mendes and ÖKO. He participated in contemporary art workshops at Casa Daros. Exhibitions (2016-19): "Art between Layers", the Cultural Post Niterói; collective "We", Gallery at the Öko, RJ.

Sandra Macedo - As a visual artist, works from 2004 with various techniques: design silk threads, watercolors, objects, facilities. Issues related to the status of women are central in his research and more recent productions.

Osvaldo Centeno – Lives and works in Rio de Janeiro (RJ). Graduated in Law from UFRJ and Master in Visual Poetics at ECA-USP, He began his artistic activities in 2000 Interference with Urban Award. He developed his studies in curatorial School Without Site, in Rio de Janeiro. Since 2010 performs curators to showcase Project Ephemeral, Studio Nineteen, in Santa Teresa (RJ). From 2011 to 2019, curated in Solar Art Gallery, the Solar Meninos de Luz philanthropic institution, serving the communities of Cantagalo and Pavão-Pavãozinho (RJ). Has published several texts and reviews, among them for Art magazine&Essay, PPGAV to-EBA-UFRJ, issue No. 27 (2014), and Digital Magazine UFRJ, Redescrições, Pragmatism and American Philosophy.

The BPE is an equipment of the Secretary of State for Culture and Creative Economy. The space meets, in addition to the collection of 200 1000 titles, a vast collection of comics and art books, children's library and 20 thousand movies. Teatro, Auditorium, musical studio, coffee, video and laboratories cabins, besides programming courses and workshops, They make the place more than a library: a unique experience. 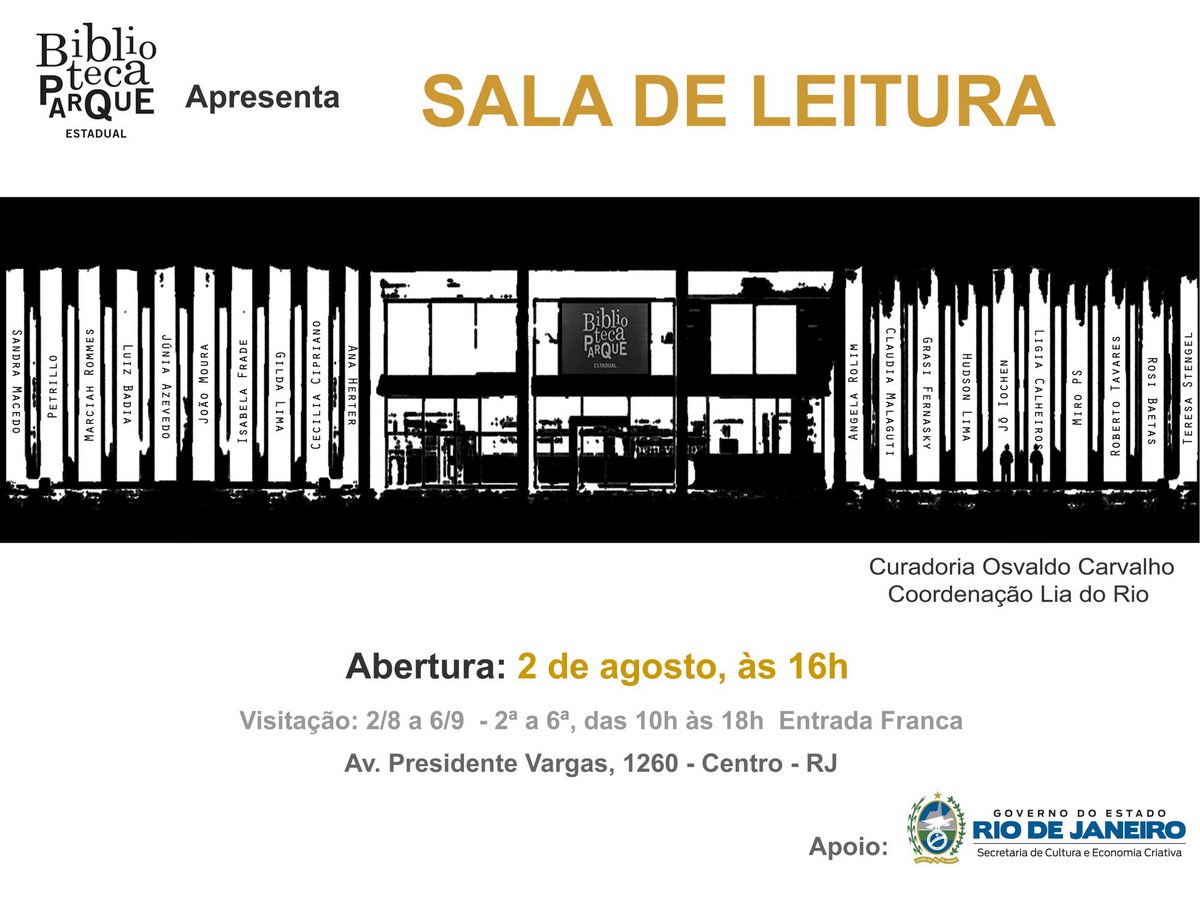 Previous: Bruno Barreto, Spiderman and surprise session are the attractions of Cine Tour
Next: 'Pizzaria Brasil`: exposure is critical to politics through paintings